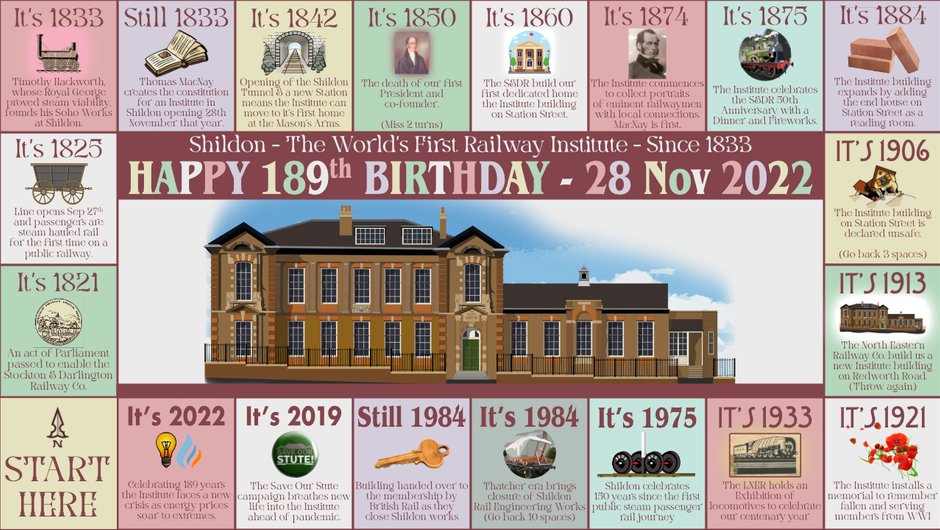 Shildon Railway Institute celebrated its 189th Birthday on 28th November 2022, yet another milestone in the story of the oldest such Institute in the world to have been founded in connection with the railway industry. That means of course that next year is another significant milestone - our 190th, and that we only have ten years to go to our bicentenary.

It was on the 28th November 1883 that a number of eminent railwaymen gathered in the cellar of the Globe Inn to discuss a vision of an organisation that would benefit not only the railway industry, but also the town of New Shildon as a whole.

The men we have to thank for this institution were:

John Graham, the traffic superintendent of the Stockton & Darlington Railway

John Glass, reportedly the first train guard on the S&DR route and who had been employed by the company since the laying of the first rail. Glass would give long service to the Institute and is one of its most eminent members.

Thomas MacNay, the secretary of the S&DR, who according to a later obituary wrote the Institute's first constitution

Francis Pickersgill Cockshott, who would go on to become a clebrated railway superintendent elsewhere in the country

On that date, the organisation was not called an 'institute' as such, but a Library for the Promotion of Useful Knowledge. The need for such is said to have been inspired by an event some time before this date which is related in the Institute's Centenary Book from 1933. It explains that John Graham was passing by the end of Chapel Street when he heard a din coming from the Globe Inn. He went to investigate to find that several railwaymen had thrown their pocket watches into a frying pan over a fire and were gamblingon which would be the first to stop working. Clearly the railwaymen of New Shildon were in need of more gainful passtimes.

The fledgling Institute was patronised, or else financially supported, by a number of dignified local gentlemen.

Given the tremendous achievement of this gift to the town of New Shildon, and now Shildon as a whole, having survived almost 190 years, we're planning some special events for 2023 to commence a ten year countdown to what we hope will be an excellent bicentenary celebration.