Save Our Stute hold a 'virtual' 187th Birthday Party online to celebrate as part of their Covid survival appeal. 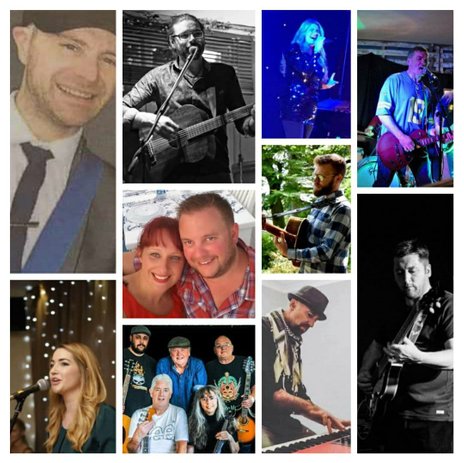 A cluster of incredibly talented local musicians, singers and songwriters came together last night (Saturday 28th of November 2020) to help the Save Our Stute campaign to bring a little sparkle and razamatazz to the community of Shildon and beyond.

Originally concieved as a means to raise further awareness of the plight of the Institute as it struggles to keep going financially in the face of tough Government and local authority enforced restrictions, the event ended up being much more than that, and was a shimmering showcase of local talent and a reminder for so many of what they have been missing through the covid crisis.

Let's not forget that many of these singers and songwriters depend in part upon opportunities to put their individual arts into practice too - and last night they did not disappoint in the slightest. What happened was a party and a celebration in the truest sense.

Dave Reynolds, who collated the contributions from the various artists involved said, "To say we only had the idea to do this a week ago, it was a surprising success."

"It was only a few days before that when we had the idea that we discovered that the first meeting of what became the Institute took place on the 28th of November 1833 in the Globe Inn on Chapel Street. I was looking for some evidence in the British Newspaper Archive online and was fortunate to find a piece in the Newcastle Courant describing that first gathering. As we had been running the CrowdFunding page for a few days, we just thought it would be great to celebrate our birthday as part of that."

"We're fortunate that a few of the Save Our Stute volunteers and other people connected to the Institute knew a few talented local people to ask - let's face it almost everyone knows someone who has a musical talent. We didn't know just how generous those people would be with their support as the, often home made, videos of their songs started to flood in. From there it was simply a case of trying to stitch them together to create the best party we could muster."

Some of the singers and musicians featured have performed at the Institute in recent years which made it much more special for those watching - it was like a 'family gathering' with far too many highlights to single one out in particular.

The contributions came from Ruth Stapleton, the Citizen Songwriters (providing the debut of a piece commissioned by Greenfields Arts and Shildon in Motion), keyboard wizard Glenn Maltman, who kindly gave permission for much of the incidental music too, Brian "Hezza" Helsop of Bishop Auckland band The Impediments, Darren Johnson, Samantha Mac, Richie Boddy of The Fabs, the extremely Irish band Share The Darkness and their singer Phil Graham, songwriter Bosko Green and an impromptu scratch band featuring Steve and Jayne Todd and their mate Kev Robinson.

The event was scheduled to start at 8:00pm precisely on two platforms, YouTube and Facebook, and just short of 2,200 views were recorded for the party on the night, which, if you consider many could have been couples, accounts for far more people than the Institute could have held if we had been holding a physical party in the big hall. We're absolutely knocked out by that reach, and to have that many people celebrating along with us, wherever they were, is an overwhelming feeling.

"We had it showing on our TV, and at one point," says Dave, "I turned round to see Kelly (who set the quiz questions) behind me completely in tears. I asked what was wrong and she said she'd just broken down reading all the lovely comments on the Facebook feed about how people were saying they were dancing, singing or clapping along and just having a lovely time, and that a good few people were saying how they had forgotten how it felt to watch some live music. She was simply moved to tears."

Throughout the show there were messages asking people to consider contributing the price of a 'pint' as a birthday gift for the Stute, a call to which a good few people responded kindly and generously.  It didn't matter that not everyone did - we've always acknowledged that the Institute isn't the only place 'hurting' in these terrible times and we respect that so many people out there will have other priorities and struggles.

The Railway Institute, its staff, volunteers and committee are so grateful, though, to the musicians and singers that made this special little event what it was - a glimmering diamond of hope for better times and representative of the strength of this community where we live. You are all tremendous and we're so proud to be amidst it all.

The event also highlighted to us that perhaps now, should it survive this current financial crisis, the Institute ought to, and will, make a special effort each year to continue to mark its birthday in some similar fashion. Though it has struggled of late financially, it has rediscovered its unique identity as being one of the threads that connects this half of the town of Shildon back to its very founders - and if that isn't worth celebrating then nothing is.

If you would like to, you can still watch the Birthday Party here

And the CrowdFund page will be open until the 6th of December so if you wish you can make a donation here up to that date.

If would like to chip in to help assure a fututre for the Stute, but you prefer to make a donation in person you can arrange to do so by contacting Anth on this number - 07783 674107