Hazel and Susan run a 'Round The Clock Marathon' to pay for a 24-Hour Defibrillator to save lives in Shildon. 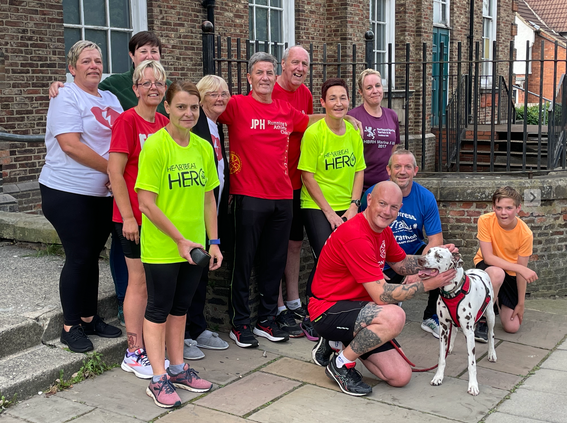 An initiative to secure funding for another 24-hour defibrillator to potentially save lives in Shildon has drawn to a successful conclusion thanks to members of Shildon Running and Athletics Club. The venture was the idea of Shildon Railway Institute Stewardess, Hazel Johnson, who was inspired to do it after a couple of incidents where customers suffered heart related incidents.

Whilst it’s true that there are other defibrillators in the town, only one of these, situated at the Town Council Offices, is accessible to the public 24-hours-a-day. With every second being important when trying to save a life, Hazel felt passionately that a second, closer to the New Shildon area of the town could make a difference by being closer and more accessible to households closer to the Railway Institute.

Hazel, a keen runner and member of the town’s running club, set herself a sponsored fundraising challenge unlike anything she’d attempted before which was to run a marathon distance by running a segment of it every hour on the hour over 24 hours, and Saturday 25th September was chosen. Though Hazel originally intended to complete the challenge on her own, she was joined in the idea and over the full distance by fellow Shildon running club member Susan Cook who was a patient and motivating influence throughout the challenge.

In the build up to fundraising day many hours were contributed by Pauline Ord, gathering sponsorship pledges and selling raffle tickets. Pauline, who lives close to the Institute, lost her partner, Jimmy Dinning, suddenly to a heart attack earlier in the year and felt strongly that helping Hazel to achieve her goal was something of a tribute to the much loved Institute regular. On the day numerous stalls were staffed by volunteer ladies of the Shildon Railway Institute Women group, including a bottle stall, cakes and a tombola - all of which, along with the raffle, was only possible through the generosity of countless people to whom Hazel is extremely grateful. The sheer scale of help offered demonstrates the widespread support for the cause Hazel chose to champion.

By the time the beginning of the run came around it was quite clear that the determined stewardess and her friend Susan would not have to run any segment of the challenge alone. Other Shildon runners, not all of which are running club members, rallied throughout the 24 hour period, each joining the duo for one or several miles. These included John Gray, Ian Rudge, Emma Flynn, Si Butterworth with son Sam and dog Ozzie, Sarah Freeman, Gareth Shaw, Lynne Foster, Julie Cane, Donna Dunmar, Andi Lowery, Sue Clarke, Jenson Stokoe, Annmarie Rushton and Debra Plews, all of whom lifted the spirits of the pair that ran the whole event, keeping them going. Special thanks were due for running coach Drew Griffiths, who came over from Seaham and completed hourly runs till very late despite being at work very early next day, and Jean-Pierre Hupin, who came to do the first mile and decided to stay and run the whole event, only to be forced to retire from running after the 1pm run with a shin injury.

Hazel’s friends Pauline, Michelle and Kelly stayed for the entire duration of the challenge to offer moral support and encouragement. Hazel was overwhelmed by all the support she received. “I’ve got to say, the way I originally planned it was to do it all on my own. I don’t think I’d have managed it. I definitely ‘hit the wall’ through the night. The fundraiser in the hall was brilliant. So many people helped set it up, contributed to it and worked on the day with a fabulous turnout attending.”

Asked whether she felt the marathon challenge was tougher or easier having broken the distance up into hourly runs, Hazel said, “It was much worse than doing a constant marathon, and I have done three. Telling your legs to start again and just really getting them warmed up before you have to stop again to wait another 45 minutes or so.”

At the end of the event the amount of money raised was counted and amounted to over £3,500, with some pledges still coming in. Hazel was delighted with this outcome as it means that not only can the defibrillator be installed, but also maintained and serviced by the Community Heartbeat Trust for a significant period of time making it a sustainable life saving facility. It is hoped that the defibrillator can be installed at Shildon Railway Institute as soon as possible.

“Even if this defibrillator only ever helps to save one life,” Hazel added, “then doing this will definitely have been worth it.”