Save Our Stute Covid-19 Survival Appeal Draws to a Close - plus the RMT, North East LEP and Livin deliver a welcome boost. 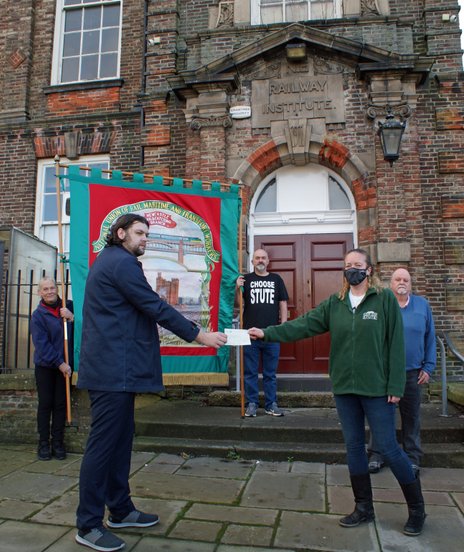 The public appeal for donations to help the historic Shildon Railway Institute financially survive the remainder of the Coronavirus pandemic received a late and welcome boost on Saturday when a representative of the Newcastle Railway and Catering Branch of the Rail, Maritime and Transport Workers Union presented a donation of £1,000 on behalf of the members of that branch.

The Branch Secretary, David King, told the team behind the campaign that, “Having seen recent articles in the local press, members of my union raised concerns that we cannot allow a significant part of our railway and community heritage to disappear.”

The branch had a meeting scheduled to take place on 27th November, over the internet, and invited a representative from the Save Our Stute campaign to address members to explain the predicament in more detail and outline the historic significance of the organisation, building and its place in the community.  After this a resolution was moved on providing support to the campaign.

Left: David King from the Newcastle Rail and Catering Branch of the RMT presents a cheque to Sue Clarke of Save Our Stute campaign as Stute Secretary Shaun Thompson, Chair Julia Teasdale and appeal co-ordinator Anth Knight look on.

“It’s also a reminder of the power of our local press,” he added, “in that had our campaign not attracted the support of the papers and local news sites online, our plight might have gone unnoticed across the region. We’re really appreciative that what we’re trying to do captured their attention and support.”

As a symbolic demonstration of that extended kinship the cheque for the donation was handed over on Saturday 5th December in a carefully managed socially distanced presentation on the steps of the institute, with the bright banner of the RMT Union branch, featuring Newcastle’s High Level bridge and generations of locomotives, in the background.

Mr King presented the cheque to Save Our Stute volunteer Sue Clarke whose grandfather had, during his working life at Shildon’s British Rail Engineering works, been representative for the National Union of Railwaymen, the forerunner to the RMT. Also present were Shaun Thompson and Julia Teasdale, secretary and chair of the institute respectively.

Sunday saw the campaign’s online public appeal draw to a successful close with a flurry of last minute online donations being made in its last few hours. The appeal was also bolstered by further contribution pledges of £500 from the Livin Community Fund and £2,500 in match funding from the North East Local Enterprise Partnership, the latter already factored in to the online appeal total. Along with donations made by public well-wishers offline, the appeal had accrued a total of £12,950 for the Institute, with the possibility of a few more donations to be handed in late.

Dave Reynolds also waxed lyrical about the warmth and generosity shown by the members and wider public towards the Institute. “We’re all incredibly moved by how people rallied to this cause, especially in these toughest of times for so many; and we really can’t thank people enough. Many out there offered substantial donations far in excess of anything we expected from individuals or families. It’s completely shifted our understanding of what the Institute, its remarkable story, and the part it has played in so many lives, means to people.”

“Though we didn’t quite hit our online appeal target, we’re not despondent in the least as the amount raised will help reset the Institute’s finances close to where they were before all the closures and controls, and gives us a very strong chance now of seeing this situation out so we can continue to work on the Institute’s future. It’s difficult to gauge how long it will take to approach a kind fo normality, but in between us starting and closing this appeal a vaccine roll out has been announced. Though we’re being warned that months of restrictions remain we have greater cause to be hopeful.”

With sincere thanks to the following donating partners.