Shildon Railway Institute receives help from locally based PPG staff and the SHA(CIC) to spruce up the Hackworth Lounge. 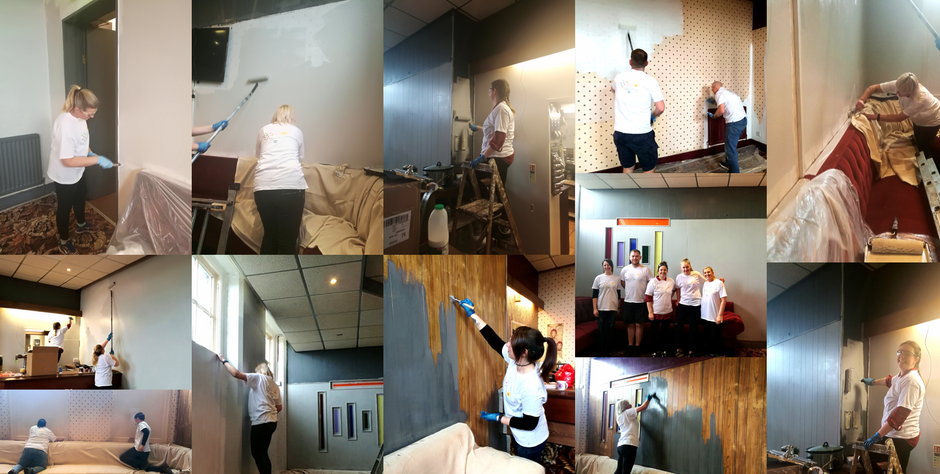 Prior to the Coronavirus closure, the Committee at Shildon Railway Institute received a very kind offer from a member of the PPG staff team at their Shildon site to provide some paint and volunteer labour for a project at the Institute. The offer all ties in with a scheme run by PPG called Colourful Communities. After some consideration over what specifically to do, it was decided that a spruce up of the Hackworth Lounge would be a great place to start.

It’s no secret that some parts of the interior at the Stute have been looking tired, worn and in need of a spruce-up for some years. In recent times what little money that could be spared has gone to making essential repairs to the fabric of the ageing building, but we appreciated the opportunity to make the lounge a more appealing and enjoyable place for our members, visitors and community to visit.

The Committee’s membership officer has an eye for colours so selected some fashionable, but surprisingly appealing, shades of grey and the team from PPG took it from there, providing the paint as well as the volunteer labour without any charge to the Institute.

PPG’s Colourful Communities program aims to protect and beautify the neighbourhoods where PPG operates around the world. Volunteers contribute their time and PPG paint products to help transform community assets like our Institute.  Since 2015, PPG has completed more than 300 Colourful Communities projects, impacting more than 6.5 million people in 41 countries.  This empowers PPG employees to multiply their impact on causes that are important to them by supporting their volunteer efforts and charitable giving.

Donna Matthews, lead of the PPG Shildon engagement team, approached the Institute after seeing about our Save Our Stute campaign on Facebook. A number of PPG employees reside in Shildon and frequent the institute. Given its historical significance for the town, a project here made it a great candidate for Colourful Communities. Donna popped along to a couple of meetings of our Committee to discuss wants and needs before consulting a PPG technical representative to select the correct products for the job, later collected from PPG owned Johnstone’s decorating centres.  Their preparation work for the project was conducted outside of the volunteers’ working hours.

Decorating work in the Hackworth Lounge went ahead before the Covid-19 closure on Saturday 7th March 2020 and ran over into Sunday the 8th with some of the volunteers reminiscing of their past experiences of the Institute as they worked.

The remaining work on the spruce-up was then interrupted by the Coronavirus. It should have been completed within the month, but as the Institute had to cease trading, the Save Our Stute campaign group, who had committed to providing a new carpet, thought it best to sit on the money they had raised during 2019 until the Institute was allowed to trade again. Though no money was coming in, bills still had to be paid while the place was empty.

Eventually, in July, after things were allowed to get going again, some of the completing touches recommenced, with Selwyn from the committee, Hazel the stewardess and volunteers from Save Our Stute all playing their part. The Shildon Heritage Alliance CIC (who run the SOS campaign) donated new rare framed historic photographs of the Institute as well as a framed copy of a portrait of Institute founder Timothy Hackworth that once hung at the Institute, sourced for us by his descendent Jane Hackworth-Young.

Though we see it as a spruce-up rather than a refurbishment, we’re incredibly pleased and proud of the work done and incredibly appreciative of the time contributed by everyone involved showing genuine community spirit in rallying around this grand old-lady of an Institute.  Our eventual aim is to prepare her to stand for another hundred years, but by making the Hackworth Lounge a more enjoyable room to use, and more interesting to visit, another important step on that journey has been achieved.

The Hackworth Lounge will, all things being well, be formally re-opened at an Anniversary Rail Heritage Day on Sunday the 27th of September 2020 when the Institute will also host an exhibition celebrating the town’s place in the world history of the railways.  We’ll be inviting our volunteers specifically to show our appreciation.

The Committee, members and Save Our Stute campaigners would like to note our specific appreciation to the following members of the PPG staff who gave their time: Gordon Zabrecky, PPG Shildon Site Manager; Susan Clarkson, Finance Manager, along with her husband and daughter; Nicola Heyhurst, HR Manager; Donna Matthews, project leader, engagement team leader and QC chemist; Julie Bowtell; Matthew Barnish; Erica Corbett and her son. Thank you one and all, and we hope to see you at the exhibition and formal re-opening on Sunday the 27th.