Railway Institute Will Host a Community Discussion on Bicentenary Celebrations 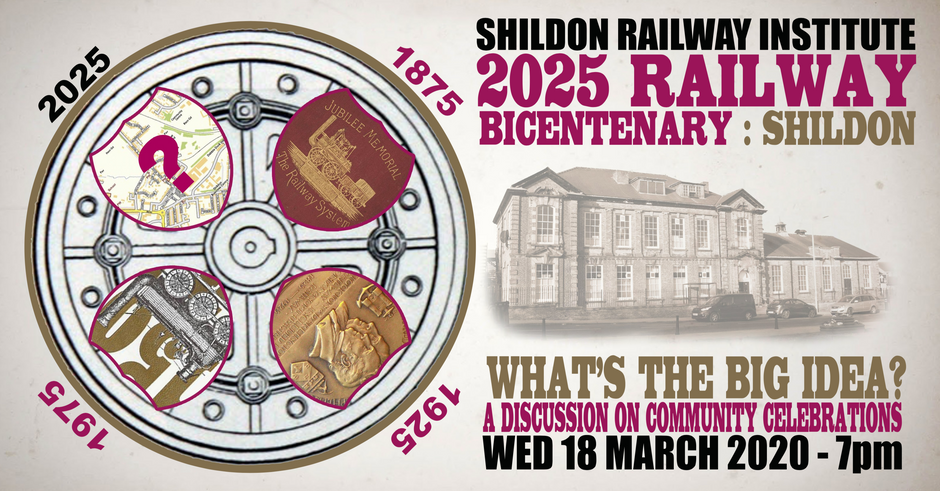 With the two-hundredth anniversary of the first steam passenger railway journey closing in on us, we at the Institute felt that as seems to have been the case in the past it will be important for us to be engaged in some way in the arrangement of community celebrations for the town.

in 1875, the Institute was at the heart of Shildon's only part in the 50th Anniversary celebrations. The main celebrations, including an exhibition of locomotives, were centred on Darlington.  Similarly, Darlington was the focus for the centenary celebrations in 1925, the year in which the Timothy Hackworth statue in what is now Hackworth Park park was unveiled, and the school was renamed to honour him.  In a break from tradition, Shildon took the spotlight in 1975, and though the cavalcade and exhibition was extremely enjoyable for our people and offered a few commercial opportunities for a few days it was deemed a flop and cost more to put on than was realised through paying visitors. One of the things many of Shildon's celebratory ventures had in common was that planning started late and in 1925, in particular, this resulted in the celebrations not being ready for September. Hence we thought the sooner we start to engage and plan the better.

The meeting is open to anyone, though we have invited representatives from specific community groups, and is entitled “2025 Bicentenary: Shildon - What’s The Big Idea?” which is taking place from 7:00 pm to 9:00 pm on Wednesday 18th March 2020 in the main hall at Shildon Railway Institute, 78 Redworth Road, Shildon, DL4 2JJ.

It’s rare that a town holds the distinction of being a ‘first’. We are incredibly blessed that Shildon does; having been the starting point for the first passenger steam railway journey on 27th of September 1825, and then the world’s first railway industrial town.

By virtue of that fact, in less than five years time there will be a unique, once in a generation, opportunity to remind the world, and ourselves, of Shildon’s historic importance in connection to the Stockton and Darlington Railway. We should show why this is still important, and ought to be a source of pride today.

How might we to do this? At this meeting of community group representatives and interested persons we’ll hear a little on the overall context in which Shildon’s celebrations may be set, and then share thoughts on how, within that context, we might steer a ‘community celebration’ for 2025 in the direction we feel would be best for Shildon’s people, identity and prosperity.

To help understand that wider landscape in which Shildon’s community celebration might be set we have engaged a number of speakers:

However, the most important words at this event will be your own along with those of other stakeholders in Shildon’s present and future. There’ll be lots of time to share, hear and capture your views and ideas.  We hope you'll be able to attend.