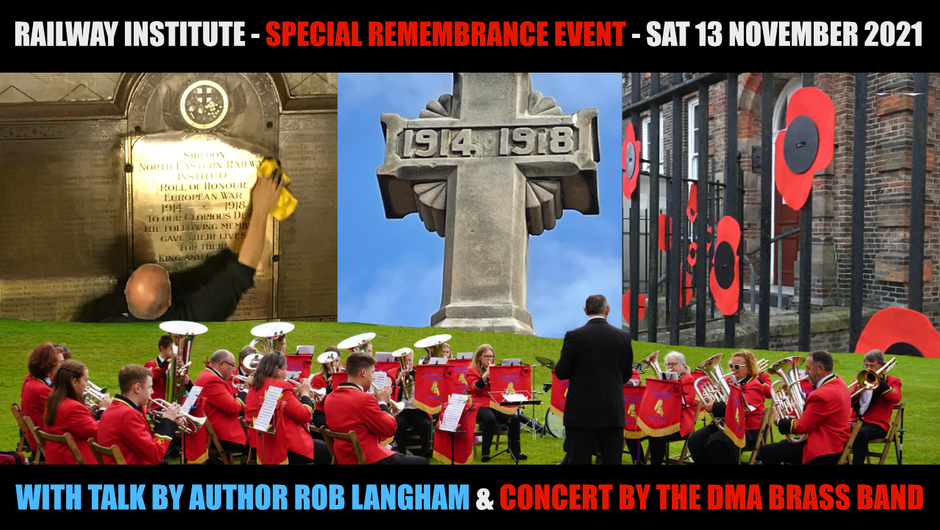 Shildon Railway Institute and the Shildon Heritage Alliance (SHA) CIC have revealed that they will mark the hundredth anniversary of their North Eastern Railway Institute Members War Memorial inside their building with a special event on Saturday 13th November in connection with the New Shildon Remembrance Ceremony which takes place on the same day. It will be an afternoon of reflection that will feature a talk on the North Eastern Railway in WWI by respected railway historian and author Rob Langham at 12:30pm and a concert by the Durham Miners Association (DMA) Brass Band at 4:00pm, both of which are free to attend.

“This year’s Remembrance will be particularly poignant for us,” the SHA’s Dave Reynolds told us. “Last year, as part of our overall programme of sprucing up parts of the Institute, I spend thirteen and a half hours polishing up the memorial on our main stairwell to bring it back to a more suitable condition. That brought us around to thinking about those named on the memorial beyond the surnames and initials that appear. Each year at Remembrance we pledge that ‘we will remember them.’ We felt the time was right to bring more detail to light so that we could remember them properly. That’s when we learned that the memorial would be 100 years old this year.”

The Shildon Railway Institute memorial, first unveiled on the 8th November 1921, is a little different to most in that, though it names 30 members that gave their lives in the conflict, it also lists a further 220 members who served in the conflict. This includes several volunteer nurses, a role often overlooked. Therefore many of the named persons returned to Shildon and were able to continue their lives, though a number were still tragically brief. The SHA set up a volunteer study group to find out as much as they could about all 250 names, building findings into a research document that will be made public on the day of the special event.

“Spending much of this year delving into the lives and experiences of these men and women has been a moving experience for those of us involved,” continued Dave. “We’ve learned so much about almost all of them, many of whom share surnames with families still present in Shildon. We’ve also learned a great deal about the Institute in that period. Since its founding in November 1833, though it was started by railway officials its membership came from a wide range of occupations. There is a misperception that later it was exclusively for railway workers from the works or the significant locomotive operating department here. We know from the 250 men and women named, however, that many of these members in the 1910’s did a range of jobs. Many were coal miners, which makes our choice of the Durham Miners Association Band for this event particularly special. Others were teachers or retailers within the town. One or two were career soldiers.”

The document that has been created from this research is intended to be part of an ongoing project. Though physical copies will be kept at the Institute, it will be also published online via the Institute’s website and there will be means for the public to feed back additional information they may have with the option to include that in future iterations of the document. Also as new information becomes available, for example the 1921 Census, the record can be updated.

The Institute has, in the last couple of years, sought to do more in connection with annual Remembrance. It has become a recent tradition to open the Institute’s doors offering free tea, coffee, biscuits and cake after the shorter Saturday Remembrance ceremony that takes place at the New Shildon War Memorial located directly over the road from the Institute main entrance. Last year, with the country in lockdown, volunteers from the SHA and the Institute Women group adorned the railings with fifty large poppies of wood and felt for Remembrance weekend; a display that will be repeated this year. It also very recently became the base for a newly relaunched Shildon Branch of the Royal British Legion.

The two highlights of the special event on November 13th have been specially chosen for their relevance. Rob Langham, who will offer a talk, has previously produced a detailed book on the involvement of the North Eastern Railway, former owners of both this Institute building and the Shildon Works, and what that company did for the war effort in WWI. It will touch on, among other things, the railway company’s Pals Battalion which was part of the Northumberland Fusiliers. The DMA Brass Band have been engaged, partly due to Shildon’s brass music connection. The sons of both of the famed Shildon born famed brass music composers, George Allan and Tom Bulch, served in that war, and the latter’s first born son, Sgt Thomas Edward Bulch Jnr, by then a military bandmaster in his own right, was killed by shrapnel on the battlefield in France during 1916. Another highly respected Shildon band and choir master, Henry Gibbon, is among those named on the Institute memorial as having served in that conflict.

All parts of the event are free of charge to attend and members of the public are welcome to attend all or any parts of this special day as they please. There will be an opportunity to leave donations towards the Shildon Heritage Alliance’s work at the Institute.