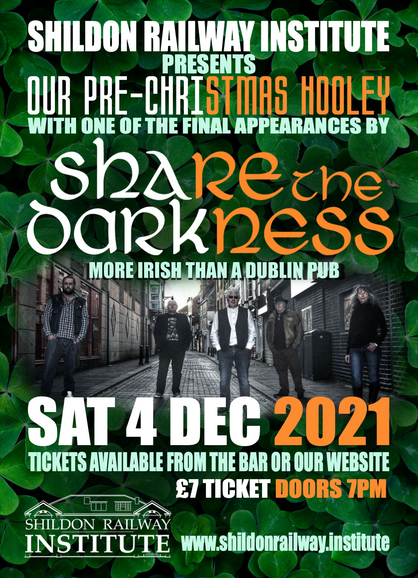 (orders via the online shop are now closed*)

Those of you that attended our first Pre-christmas Hooley back in December 2019 will remember that it was an amzing night with the whole room singing, dancing and clapping along to some of the best in Irish folk.

Then in 2020 they contributed a song to our Instiutute 187th Virtual Birthday Party which was a truly unique event.

The band have since built a huge fan base around the region with their repertoire of authentic traditional Irish favourites - we're talking about the kind of music that everyone can't help but sing along with or get up to dance to.

This award-nominated band has only been around a brief handful of years but their hard work appears to have taken its toll as quite recently, having been unable to replace a couple of the band members that are looking to take things a little easier, the band announced that they would break up at the beginning of 2022.

That means this show will be one of the very last chances to see their unique and magical chemistry in action.

Think...The Saw Doctors, The Waterboys, Dropkick Murphys, Flogging Molly, The Pogues, The Dubliners and more and you'll be on the right lines.

We're delighted that they are returning to play one final pre-Christmas Hooley for us.