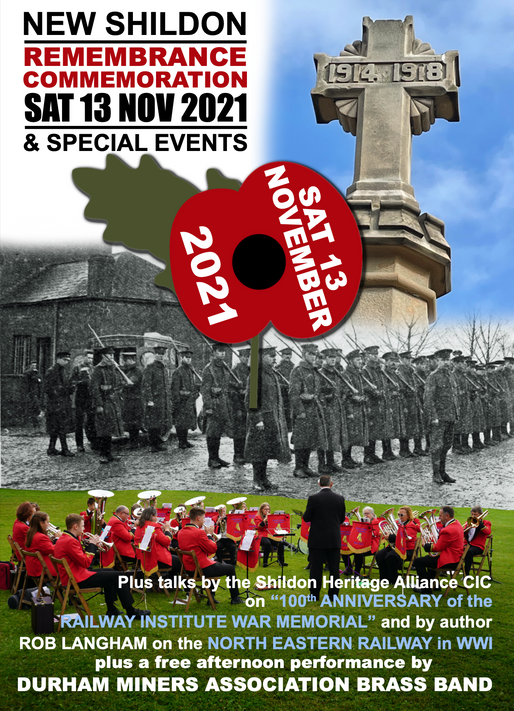 As has now become a recent tradition, Shildon Railway Institute will throw its doors open on Saturday 13th November following the Remembrance commemoration at the New Shildon War Memorial on Redworth Road.

Old and New Shildon were separate towns at end of WWI, each with their own parish church, and each had its own commemorative service. Nowadays the main remembrance commemoration takes place at the St John's Cenotaph on Remembrance Sunday, but as we have vowed that "we will remember them" the men named on the New Shildon Memorial are remembered each year on the Saturday.

All those attending the Saturday ceremony will be welcome afterwards to the Railway Instiitute's main Hall, where free tea, coffee and cake will be served by members of the Institute Women group.

2021 marks a special milestone for Shildon Railway Institute in terms of Remembrance as this year marks 100 years since the Institute's own North Eastern Railway War Memorial was installed and unveiled. As a consequence the Institute and the Shildon Heritage Alliance CIC (the group behind the Save Our Stute campaign) have planned a series of special added features to mark the occasion - we hope you will join us for these.

10:40am - Please meet at the junction where the Factory Road (through Dabble Duck Industrial Estate) meets Redworth Road. From here the group will be taken up to the New Shildon War Memorial for the Remembrance ceremony.

At the end of the ceremony - everyone is welcomed back to the main hall of Shildon Railway Institute, immediately over the road from the New Shildon War Memorial, for free tea, coffee, biscuits and cakes etc. served by our volunteers.

12:00 noon - A short talk will be given by Dave Reynolds of the SHA CIC explaining the significance of the hundredth year of the Institute's own War Memorial and revealing what volunteer researchers have learned this year about the men and women listed upon it.

12:30pm - Author and historian Rob Langham will give an insightful and engaging illustrated talk on the North Eastern Railway in WWI - revealing the extraordinary contribution that railwaymen (and women) from Shildon and other town on the North Eastern network contributed during the First World War.

16:00pm - The Durham Miners Association Brass Band will offer a performance in the Institute's main hall, partly in tribute to Shildon's own bandmasters and native born brass composers, who were members of this Institute and at least one of whom lost his son during the war.